Written by Ben
Updated over a week ago 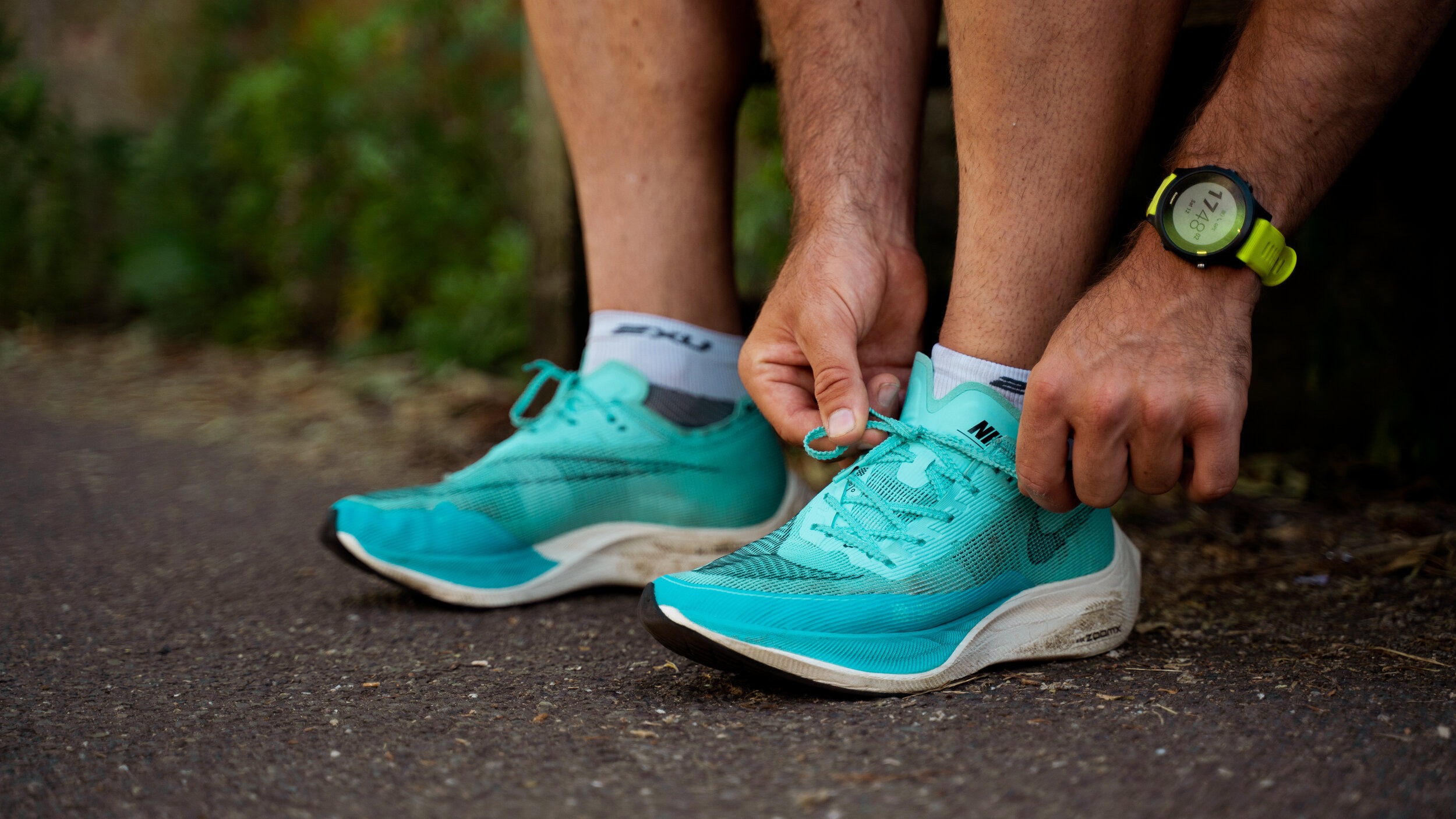 The world of running shoes is overly complicated these days but is something that you should aim to understand to make sure you're setting yourself up for a successful running journey ahead. It is worth getting your running shoes from a shop that will properly fit your shoes, let you try them on whilst running on a treadmill and, if possible, to undergo a form of gait analysis too.

All of the different types of shoes have their own pros and cons, and its worth understanding this to be able to make the right choices for your body and the type of running you want to be doing. Our Physio Aidan suggests making small, incremental changes on the shoe front, while sticking to the rule: 'if it's not broken, don't fix it'.

It is also worth noting that shoes are made with a role in mind, so your carbon racer shoes won't be perfect for your easy runs and with the same rational, your softest spongy shoes won't be so good for racing either!

As humans our bodies have evolved to run before modern technology with thick spongy heels and ankle support. We're not suggesting that everyone should ditch the trainers and run entirely barefoot, but there is some logic for this as we'll go onto explain. As humans, we've taken up relatively sedentary lifestyles with a lot of time spent sitting, which leads to tight hip flexors and bad posture. This, coupled with excessively thick spongy heels on modern running shoes makes it easier to land on the heels of your feet with poor running form without feeling excessive pain. Choosing more cushioned shoes can then reinforce this form and mask the underlying issues.

Make sure to check our guide on proper running form.

The best running shoes according to Jamie's Running

If you’re not already following Jamie’s Running, you need to. The 36 year old dad of 3 has been documenting his journey back into running on both Instagram and YouTube, and in 2020 alone, he completed 70 (!!) half marathons and one ultramarathon. He's kindly agreed to join us as a guest editor, giving the low-down on his all-time favourite running shoes for easy runs, interval runs, tempo runs, and races.

"I love running. I love running shoes. I love doing different runs in different running shoes! But the shoes I choose depends on the type of run I am doing. There are so many awesome shoes out there, and I’m going to talk a little bit about the pairs I find myself automatically reaching for when it comes to doing an easy run, interval run, tempo run, or race." - Jamie's Running

Otherwise known as base miles or recovery runs, where the key is just to relax and enjoy the ride. With enjoyment in mind, I want a shoe that feels comfortable, plush, and cushioned, to maximise comfort and allow me to focus on enjoying the run. 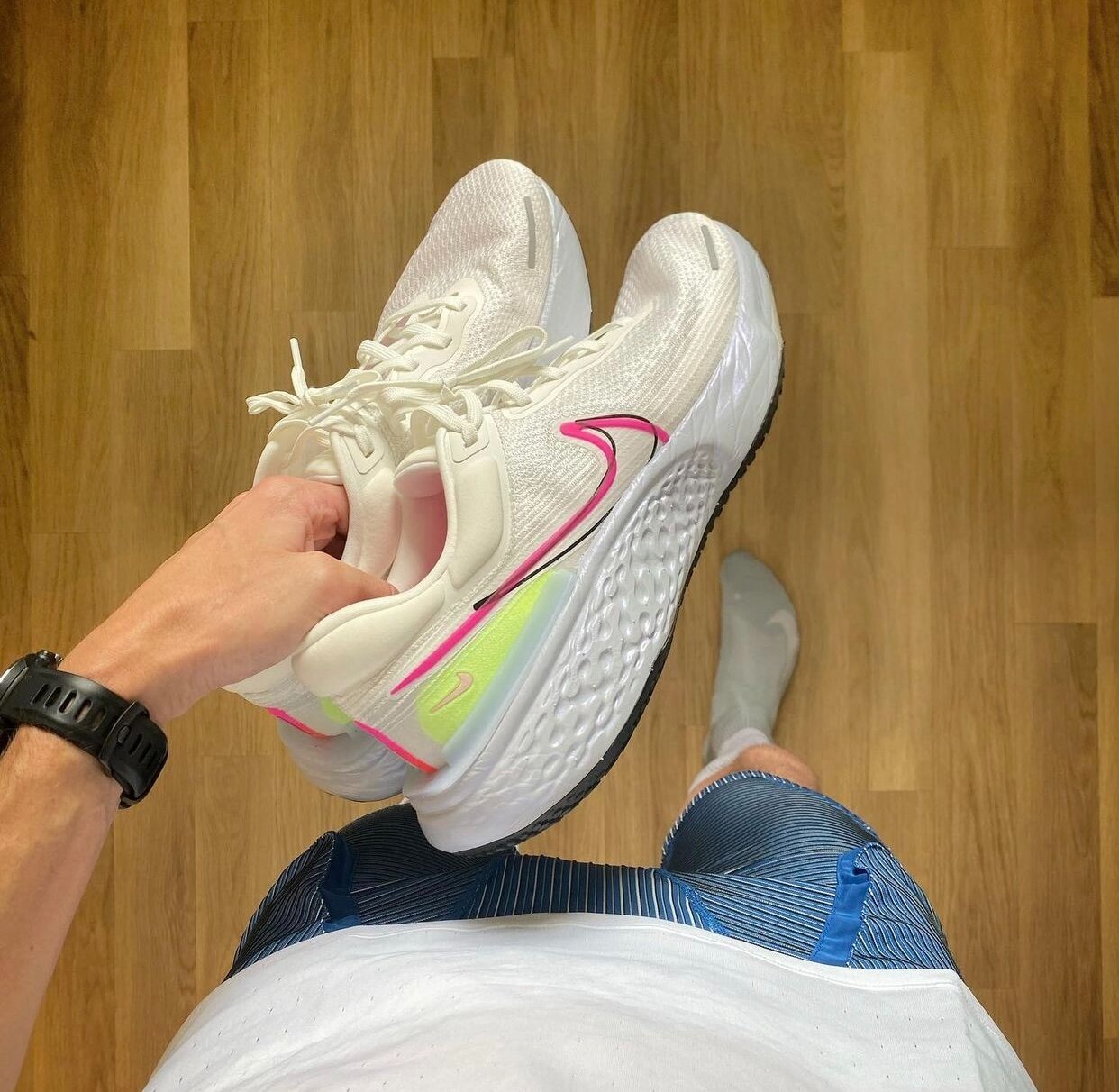 The Nike Air Zoom X Invincible Run Flyknit tops my running shoe charts for easy runs. A highly cushioned shoe with a large Zoom X midsole, making it feel as though you’re running on freshly fluffed pillows. It took me a short while to get used to the Invincibles initially – they’re somewhat bulky and quite heavy, and at first, I wasn’t so sure – but once I clicked with them that was it, I immediately find myself drawing comparisons to them any time I try another shoe for easy runs. Nothing quite compares.

I have two pairs of Invincibles in my rotation, one with almost 400km under its belt and another that is almost brand new; the midsole on the 400km pair still feels as good as it did after 10km.

They have a thick rubber outsole which is hard-wearing, making them ideal for banking lots and lots of miles without wearing through to the midsole foam (Zoom X is quite fragile, and tends to crumble quite quickly if it comes into contact with the ground). Because Zoom X foam is so squishy, the base of the shoe is insanely wide – this ensures the shoe remains stable but also contributes to the big, bulky feeling.

There’s also a lot of cushion in the upper, the tongue, and the heavily padded collar around the ankle - this felt almost overwhelming at first, but once you accept the shoe for what it is, you feel like your feet are getting a big, squishy cuddle each time you slip them on.

Because of the weight, I don’t tend to use them when pushing the pace; having said that though, many people do. For me, they’re just a great shoe for banking lots of easy recovery miles in maximum comfort.

These involve mixing up the pace within a single run, changing through the gears, pushing hard, and going easy. As a result, I look for a shoe that feels just as much at home at a slow pace as it does when I put the hammer down. 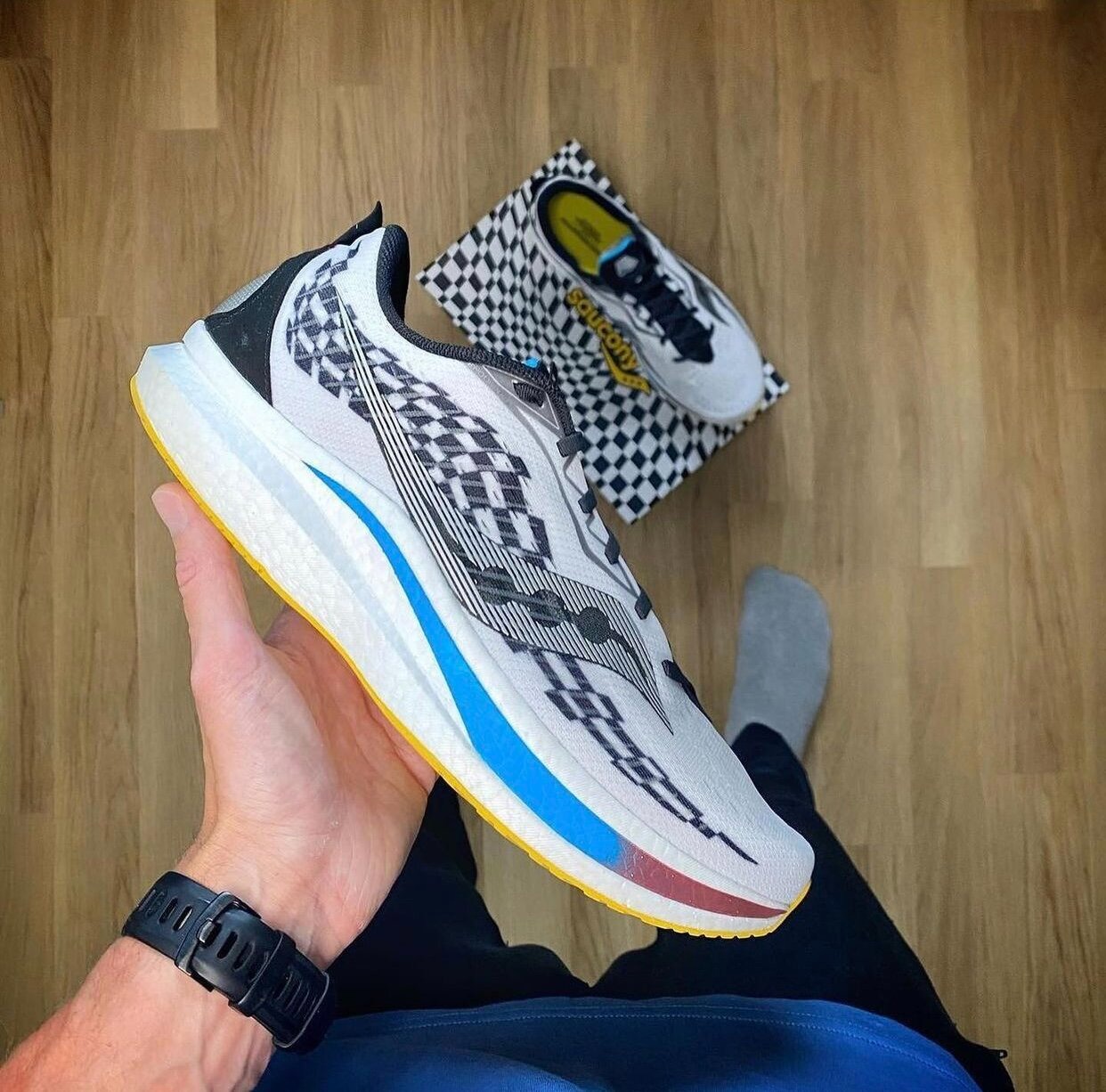 The shoe I reach for on interval days, and in fact, my favourite all-around running shoe is the . This is a shoe that appeared on my radar in the summer of 2020; the eye-catching Mutant colourway really caught my attention and 3km into my very first run, I was hooked. I was recording a YouTube first impressions and actually uttered the words “I think I’m in love”.

These have a comfortable fit, with just enough flex in the upper to not feel too restrictive, and enough cushion (but not too much) in the PWRRUN PB midsole to absorb the shock of each footstrike whilst maintaining the feeling of being in tune with the road. There’s a composite nylon plate running through the midsole; this is flexible enough that you don’t really notice it at during easier efforts but seems to return some of the energy you put in as you start to ramp up the pace.

Saucony’s Endorphin collection is powered by SPEEDROLL Technology; a footwear geometry that gives you “an effortless, always-forward motion that makes every speed feel like top speed”. What I love about the Endorphin Speed is the way it makes me feel when running in it; as though I’m running like a pro with perfect form, the transition from footstrike to toe-off has a somewhat effortless flow. It’s important to maintain good and proper form during intervals as you’re putting your body under a lot of strain; poor form could easily result in injury but I find that the Endorphin Speed certainly helps to take care of that.

These are harder, sustained efforts with no slowing down. The idea is that you spend longer periods running at more challenging paces to help you to both physically, and mentally, adapt to harder workloads in preparation for a race. 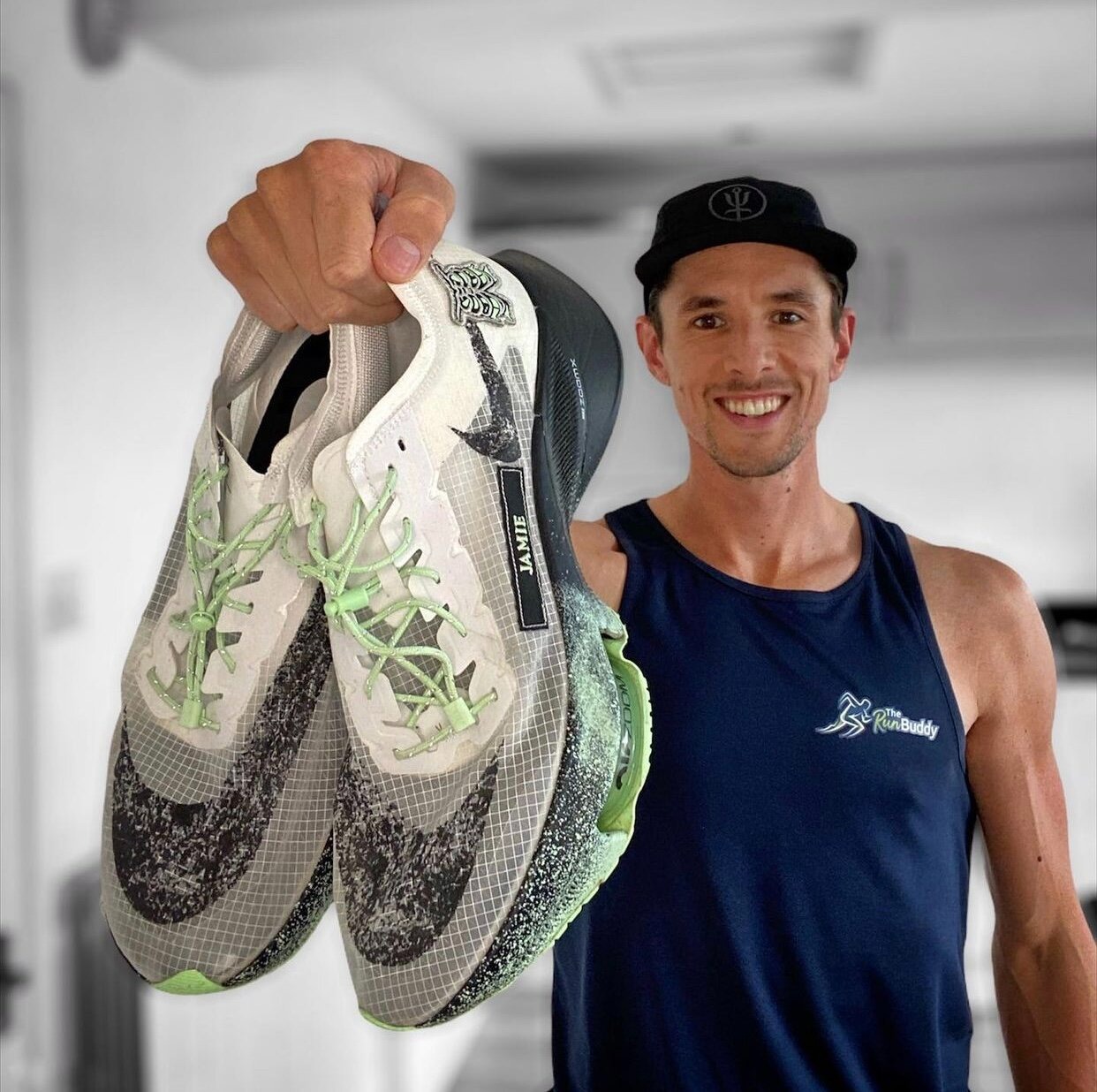 There are only a few shoes that I rotate for my tempo runs, but one to note is a Nike By You shoe that I created. I combined a Nike Air Zoom Tempo Next% midsole and outsole with a Nike Zoom X Vaporfly Next% upper.

This hybrid of the two shoes takes the bouncy Tempo Next% midsole (a combination of Zoom X in the footbed, Zoom Air units in the forefoot, and React foam in the heel) and adds the Vaporweave upper, which I find gives a more secure and locked-in feel than I get from the traditional Flyknit upper of the Tempo Next%.

There is a full-length nylon plate running throughout the midsole; it’s not as rigid as the carbon fibre plates of many racing shoes, and so enables some energy return whilst not taking too much away from the natural movement of your feet.

When it comes to race day there are now so many amazing options out there. For a while, Nike dominated the market with the Nike Zoom X Vaporfly Next%, but many of the other brands have now caught up with some truly awesome offerings.

I’ve tried my fair share of carbon plated shoes, including the Adidas Adizero Adios Pro (great choice), Saucony Endorphin Pro (also awesome, taking the ‘running with pro form’ feel of the Endorphin Speed and throwing in a carbon plate to make you feel even faster), New Balance Fuel Cell RC Elite V2 (very cushioned and remains comfortable for a prolonged period), and Atreyu The Artist (a no-frills affordable carbon plated option, with a similar feel to the Adios Pro). 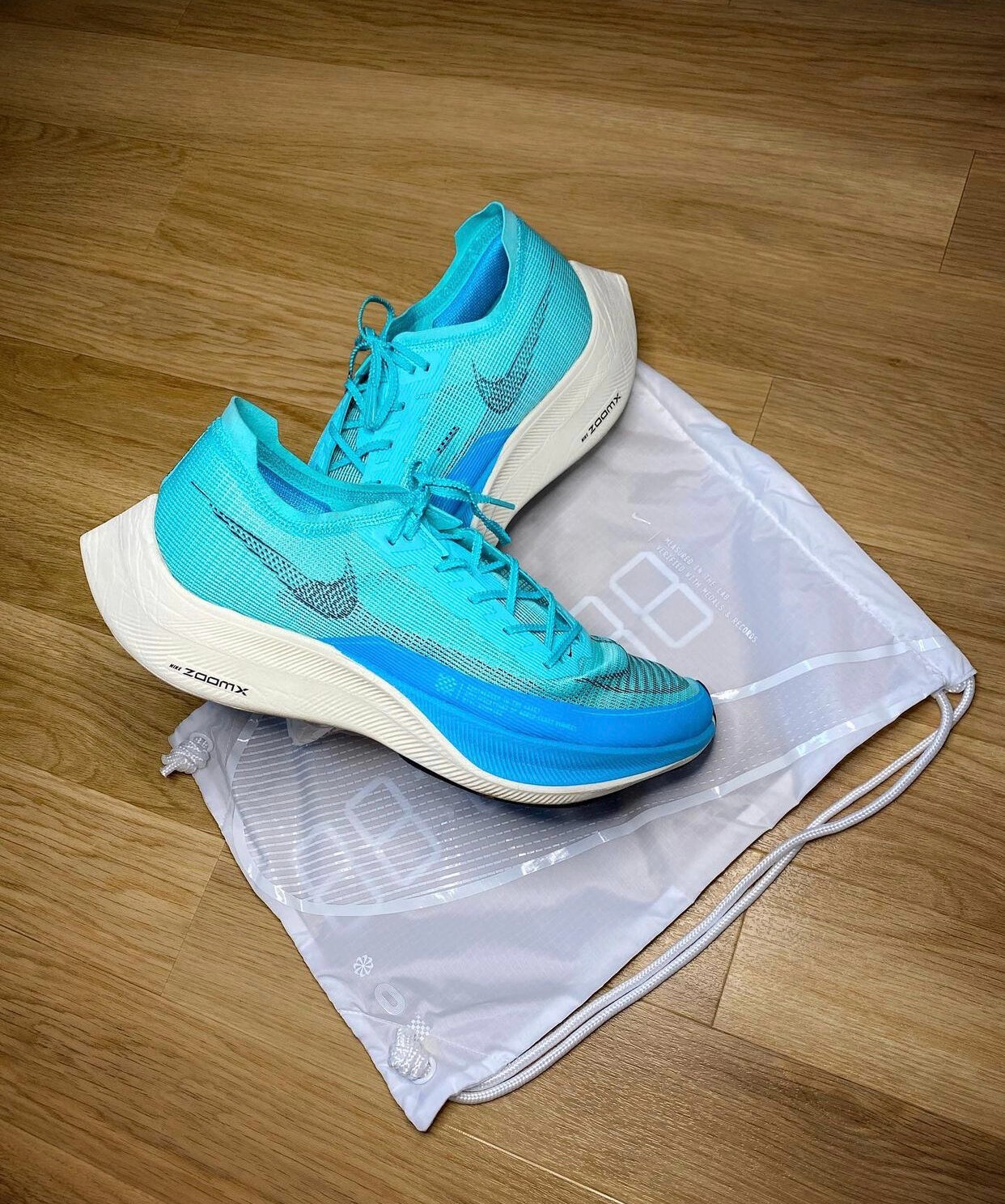 In my opinion, there’s nothing quite like the Nike Vaporfly Next% 2, the shoe has an aggressive kick which gives you the feeling of running faster than you ever thought possible (side note: during my first few times running in the Next% I broke my 5km, 10km and half marathon PBs by between 4-5%). They really do feel like rocket boots!

The Next% 2 takes the midsole and outsole of the Next% and pairs it with an updated mesh upper. This offers more space than the Vaporweave upper of the Next%, and as I have large, wide feet I prefer having the additional wiggle room. There have been instances in half marathon races in the Next% when my feet felt too restricted and I ended up with painful blisters from my toes rubbing together.

They’re not as cushioned, long-lasting, or hard-wearing as some of the other options; I found that I wore through the outsole and midsole within about 200km in my first pair, and had to retire them as the carbon plate was scraping against the floor. However, purely for that feeling of insane speed on race day, there’s really nothing quite like them.

So there you have it, some of my favourite shoes depending on what type of run I’m doing. Thanks so much for taking the time to read!

Carbon shoes are quite possibly the most talked about running show out there. They have been designed to help top pro athletes shave seconds from world records, however the marginal gains these high tech shoes bring top athletes still help the everyday runners like ourselves. Carbon shoes have a carbon assisted spring like technology that helps give more power into every step meaning you can run just as fast with less effort, or even run faster with the same effort! What's not to love right?

These top end shoes are much more expensive and to be so fast and light they're not so durable. These shoes will not last nearly as long as conventional running trainers so should really be saved for just the fastest of training sessions and race day to avoid putting a huge whole in the bank replacing them every few weeks!

To add to this, by having a carbon assisted plate down the middle of the shoe, it allows the muscles in our feet to 'switch off' or become more lazy. When it comes to building a strong functional body this is not what you want - another reason why you y you should train in more everyday shoes for those easy sessions and the buylk of our mileage. Save those Carbon shoes for fast intervals or for race day, we assure you that you won't be let down!

Did this answer your question?